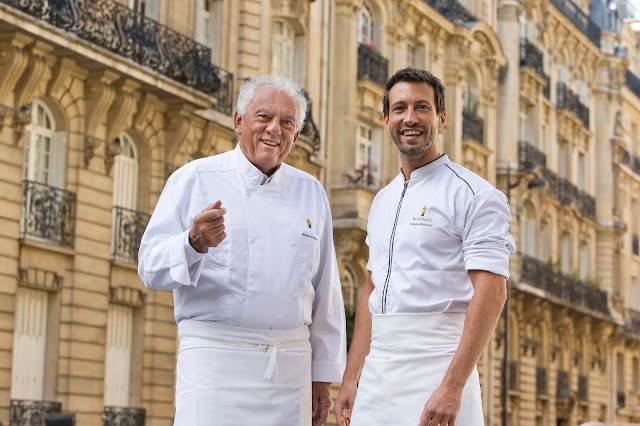 The transmission of the Rostang family’s culinary know-how carries on for 6 generations. Son, grandson and great-grandson of famous gastronomy-lover cooks, Michel Rostang keeps up the family adventure for more than 30 years, a lifetime dedicated to the pleasure of a plentiful table.
Caroline and Sophie, his 2 daughters, get caught up in the game very young. For them, it was simply out of the question not to perpetuate the work of 5 generations of cooks while it was their father’s dream to work with them and to be able to engrave “Rostang Père & Filles” on his restaurants’ front window. Thus this inescapable hand-over has been implemented progressively and naturally.

After an apprenticeship at the Ecole Hôtelière in Nice and trainings at Lasserre & Lucas Carton in Paris and Laporte in Biaritz, Michel Rostang joins the family restaurant in Sassenage (Isere region) from 1973 to 1978 to practice his talent.
The saga really starts in august 1978, when the Chef opens his eponymous restaurant in Paris and gets his first Michelin star in 1979, quickly followed by the second star in 1980.
His wife, Marie Claude, daughter of the talented Jean Féraud, helps him to lead well his chef life: family, head chef & manager.
He also became the first Parisian Chef to create a « bistrot », Le Flaubert, just across the corner of his gastronomic restaurant 25 years ago. This first experiment was a great success and has been followed since by plenty other openings in Paris.

In the continuation of the cuisine beloved by Michel Rostang, Nicolas Beaumann, chef of the gastronomic restaurant, thinks up dishes at the cross-road between traditional cooking and creative fulfilment.
After being Chef de Partie and then Sous-Chef of Yannick Alléno from 2003 to 2008, Nicolas Beaumann joins the 2-Michelin-starred restaurant of Michel Rostang in order to become Chef de Cuisine. His experience enables him to work the finest products with precision and combining the basis of the classical cuisine and a modern spirit.
His cuisine is testament of his training of Saucier and of his attachment to juices: a flavourful and essential union, in order to enhance the products and the savours. Stuffing, studding, preserving… are words which reflect his effort to make the products sublime and his adaptation to Maison Rostang’s savoir-faire.
Uncompromisingly, he redesigns the dishes each season and naturally makes evolve Michel Rostang’s great classics with virtuosity. Beyond a simple taste signature, his cuisine reflects the Rostang spirit: delicious dishes in which the product has star billing, the cooking process is mastered and the juices leave their trace. 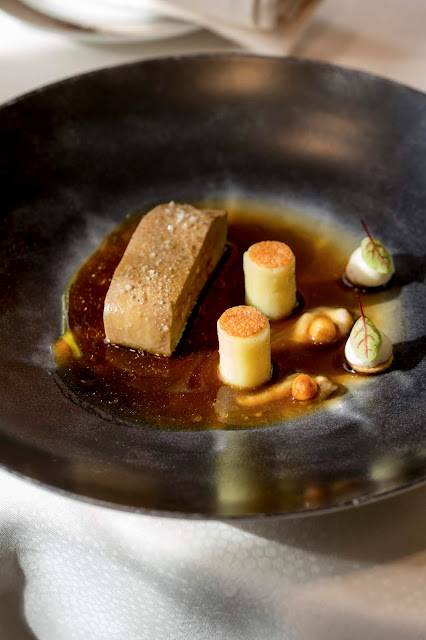