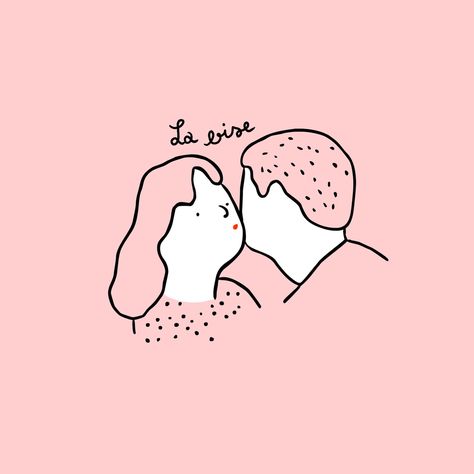 Has someone greeted you with what we call “la bise” – a kiss or two – during your time in France? Perhaps you found it a bit strange, perhaps it’s not something you’re used to? Let’s try and unravel this very French custom together!

Why do we exchange kisses?

French people aren’t content to simply say hello or shake hands, they exchange kisses, and there’s a whole art to it.
You should know that France is full of subtleties when it comes to social interaction, and these are sometimes hard to grasp as a foreigner.
La bise is more than simply a french tradition; it’s a habit, a reflex even. Its origins are sometimes forgotten as we consider that this custom has been part of French culture for centuries, but like everything, the rules and practices change over time. La bise is primarily used as a greeting, but it varies depending on the person in front of you.
If it’s someone you’re in love with, then it goes without saying that you kiss on the mouth. But what about other people? What do you do then? Well, you exchange poutous, bisouilles, becs, bisous, bécots – there are a multitude of terms describing a quick kiss or peck.

Who should you kiss?

People who haven’t learned to greet each other in this way from a very young age often look awkward, leaning forward a bit stiffly, not daring to touch the other person and unclear how to begin or whether it’s appropriate to kiss this person. But we’re not here to mock, people from other countries often face this problem.
When meeting up for fun, for parties, for outings, or sometimes just in passing, we kiss our friends. Naturally, though, the length of the embrace is proportional to the number of friends. Make no mistake, it’s equally unbearable for us as French people if we have to greet a dozen people in a room, especially when it’s easier to just say ‘Hi’ with a wave. Too many kisses can be annoying, but not kissing is also a source of unease.
Above all, you should take into account family or professional relationships, and the age and status of the person. For example, be aware that while you shouldn’t exchange kisses with your boss – or, at least, you should wait for him or her to initiate the exchange – there’s no issue between colleagues.
As for men, it depends; they sometimes exchange kisses if they are friends or part of the same family. Young people, however, tend to greet each other with kisses a lot from secondary school onwards.

This is a source of even more confusion. In general, it’s two – this is certainly the case in Nice or Paris – but in cities such as Montpellier it can be three and sometimes four. Even French people themselves sometimes aren’t exactly sure how many kisses should be exchanged in each particular region. It all makes life very complicated.


When you don’t know someone, it’s easy to end up having an awkward moment, and that’s why there’s a website there to help you. It will tell you how many kisses you need to exchange depending on where you are: www.combiendebises.com
Labels: Culture Traditions